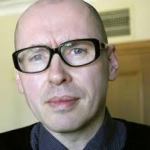 Luckily, though, on the evidence of the packed room at Manchester’s Football Museum last night, David’s style is for a lot of people. And it’s certainly for me. Ever since picking up Nineteen Seventy Four, a long time before The Damned United and the Granta Award made Peace a celebrity, I’ve been hooked on his novels. His staccato style and brutal subject matter lead to novels that hypnotise, shock, fascinate, and horrify. Peace spoke briefly about how he now looks back on Nineteen Seventy Four with some regret. It is the only piece of fiction he’s written which is entirely fictional. The crimes are not real. He feels that in creating these crimes he somehow glamourised or sensationalised violence, murder, and child abuse. I can see his point. But I have to say that the image of swan’s wings stitched into the body of a murderer’s victims is one that has stayed with me for longer than anything else I’ve read in literature. And at no point does Peace’s debut novel side with or condone the hideous violence it portrays.

But he has certainly developed as an author, and that was largely the subject up for discussion during the first half of last night’s talk. Interviewer Dave Haslam asked a lot about the early works, particularly The Red Riding Quartet and GB84. The focus was on how Peace’s unique style has evolved and the sensibilities that lie behind it. Peace talked eloquently and with a lot of humour about how he never meant to present West Yorkshire as an inherently negative place, but how growing up in the era of the Moors Murders and the Mining Strike meant that it was impossible for him to present an account of his home county that didn’t suggest things were pretty ‘grim up north.’

As the event was at The Football Museum, talk was bound to shift focus as the night progressed. Peace proved as willing and able to discuss football as he has always been with Thatcher, Yorkshire, and the state of the novel today. His latest work, which I am two thirds of the way through, focuses on Liverpool legend Bill Shankly. Being a Nottingham Forest fan, and an ardent hater of all things Liverpool FC, I was a little concerned when I found out that one of my favourite authors was releasing a 715 page epic about a team whose match reports I skip over in the back pages of the paper. But Red or Dead is not just about Liverpool. It’s about a lost world, a generation before football and society became all about money, it’s about socialism, about passion, about society working together to achieve its goals.

It’s also Peace’s first positive novel. Last night he discussed how everything he has written before was a critique, a picture of what he thought was wrong with the world. Red or Dead is his take on something that was right. A mentality and a society that we could learn a lot from today. And you could really see the positivity in his performance on the stage. There was a joviality and wit that has been less obvious when I’ve seen him on stage before. Yes, we still got the odd rant about Thatcher, the odd jibe about the world we live in. It wouldn’t have been David Peace if we didn’t. But when he read from Red or Dead he did so with a smile on his face – and that’s something he’s never been able to do when reading about The Yorkshire Ripper or The Miners’ Strike. He proved that he is not only an insightful social commentator, an expert on matters ranging from history, to politics, to football, but he’s also a bloody funny and extremely humble man too.